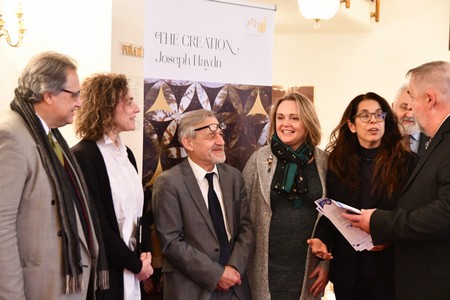 Ilja Racek - Sovrintendente Sleske Dvadlo Opava (CZ)
Pavel Ionescu - Artistic Director Filarmonica M. Jora di Bacau (RO)
Nikos Efhtimiadis - Presidente della Panellenic Federation of Chorus and Choral Conductor
Ludek Golat - Opera Director - Consultant Sleske Dvadlo Opava (CZ)
Leonardo Quadrini - Conductor and Musical Director of Symphonic Orchestra Tchaikovsky of Udmurtia Republic
Saverio Clemente - Director InArt Management Milan
Daniela de Marco - Founder and Artistic Director Sacred Music International Competition
(working progress)
Press Conference of Winning project Creative Europe
Let's Sing Oratorio Music! - Sleske Dvadlo Opava (CZ)
The Jury
13. The Jury panel composed by representative of Partners of “Let’s Sing Oratorio Mu- sic!” and/or Manager, Directors or Lyric Agents from leading European institutions will judge the singers to be selected to the Final round and to declaration of the winners, and the additional prizes of the “Sacred Music” International Competition – 2020.
14. The Jury of the International Competition, appointed by the Academy,  will consist of a President and a maximum of sixt judges of high reputation, chosen from the worlds of music. The names of the Jury will also be published on the official websites of the Competition sacredmusicinternationalcom-petition.org, concorsomusicasacra.com and www.letsing.ue.
15. Every decision of the Jury is final, not subject to discussion or appeal. The Jury has the right to interrupt a performance, to ask for a performance to be repeated, not to award a particular prize or prizes or any prize at all if none of the competitors is considered eligible. With reference in particular to the semi-final, in which more pieces are required to be performed by each competitor, the jury is entitled to interrupt the performance of any singer at any time – for any reason, fully maintaining the right to judge on all or part of the entire performance.
16. The winners of the Qualifying and Semi-final round will be decided by majority vote of the Judges. Only in the case of a tie, the President will have a casting vote. In the Final the vote will be determined by the sum of the numeric marks given by each member of the judging panel – within a range from 1 to 6, and the chance to give intermediate votes of a minimum of 0.50 (and no chance to give any other decimal)
International Meeting Choir.
17. If a competitor has had during the past two years (from the date of the beginning of the Competition) personal, didactical or work relationships with one or more members of the Jury, this member/these members will abstain from giving his/their evaluation. The reason for the abstention will be reported in the proceedings of the Competition.
18. No technical evaluation of any kind of a competitor excluded from the Final round will be given either at the end of the Qualifying round or of the Semi-final.
Back to content